I just wanted to reflect on the Biblical character of Job who was tested in many ways in his life so that his integrity could be compromised. Who said that leading a lifestyle with integrity was easy has to be a liar. In NO way is living a life filled with integrity easy. There are so many things found in this world that are geared at enticing us to stray from our moral and godly compass, that we literally have to guard our hearts and minds as is written in the following scripture:

6 Be anxious for nothing, but in everything by prayer and supplication, with thanksgiving, let your requests be made known to God; 7 and the peace of God, which surpasses all understanding, will guard your hearts and minds through Christ Jesus.

Meditate on These Things

Satan wants us as Christians to not hold fast to what is True; to what is Noble; to what is Just; to what is Pure; to what is Lovely; to whatever is of a Good Report; and to anything that has Virtue or is Praiseworthy. These are the things that we must hold fast to with respect to maintaining a Godly Character as Christians. If we knock out these virtues at anytime in our walk with God, we compromise our very own INTEGRITY. Job knew that holding onto his integrity would come at a huge cost, but his Faith in God allowed him to endure various trials and tribulations that allowed God to bless Him. Because the story of Job is pretty long, I’m going to have to separate his trials into 2 or 3 posts. So here is Part 1.

What were the trials that Job faced?:

2. In Job 1:13-22 – Job loses his property to the Sabeans through armed robbery as they also killed his servants in the process; and all of Job’s children perish in his house as a strong wind blew the house down and crushed all the children who were in it.

But what was Job’s response to this tragedy? It was praise:

20 Then Job arose, tore his robe, and shaved his head; and he fell to the ground and worshiped. 21 And he said:

“Naked I came from my mother’s womb,
And naked shall I return there.
The Lord gave, and the Lord has taken away;
Blessed be the name of the Lord.”

22 In all this Job did not sin nor charge God with wrong. In Job 2:1-10 – Satan attacks Job’s health. The calamity that befell him regarding his health even got his wife to speak against God in verse Job 2:9 – 9 Then his wife said to him, “Do you still hold fast to your integrity? Curse God and die!”.

However, Job did not listen to his wife and called her foolish for he refused to curse God with his lips in:

Job 2:10 – 10 But he said to her, “You speak as one of the foolish women speaks. Shall we indeed accept good from God, and shall we not accept adversity?” In all this Job did not sin with his lips.

In Job 2:11-13 – Job’s three friends – Eliphaz the Temanite, Bildad the Shuhite, and Zophar the Naamathite all came to visit Job and mourn with him as they witnessed the calamities that Job was experiencing while choosing to remain steadfast in his unwavering faith to God. In looking at what Job was going through, you’ve got to ask yourself this question as a Christian: Was this the price of holding onto one’s integrity? Is it really worth it? …

4. In Job 3:1- 26 – Job deplores his birth. Basically, it’s as if he regrets the day he was born and kind of goes on with a long lamentation regarding the worth of his life in this long mournful speech. Depression is very real here my friends. When you see your Christian brother or sister suffering, it’s not like as if they want to suffer just for simply doing the “right thing”. The world has many temptations that could lead us to opt out of being a Christian when times get tough and we could simply sell our souls out to the devil when we hit rock bottom, but what I find to be amazing about Job, is that he still chose to endure to the end and God blessed him for his faithfulness.

5. In Job 4 – Job’s friend Eliphaz assumes that Job’s problems are due to some sin that Job has committed. Eliphaz is indeed incredibly presumptuous to assert to this conclusion.

6.  In Job 5 – Job’s friend Eliphaz continues with his presumptions by claiming that Job is being chastened by the Lord. How many of you have had that “One” friend, who watches you go through hell and starts accusing you of having done something wrong to deserve all the calamities that keep going your way? Eliphaz epitomizes such a friend that is indeed presumptuous and talks back with an attitude of self-righteousness since they can’t seem to understand this one thing that sometimes – Bad things happen to good people.

7. In Job 6 – Job ignores his friends presumptuous behaviour and declares that his complaints are just. Just because Eliphaz doesn’t understand why Job is going through this hell, doesn’t mean that he should point the finger at Job by claiming that there must be some hidden sin Job has committed for all these bad things to be happening to him.

8. In Job 7 – Job feels that his suffering is comfortless. I mean, can you blame him for thinking that way though? With friends like Eliphaz, who needs enemies huh?!

9. In Job 8 – Bildad, Job’s other friend suggests that Job should repent. Again, his other friend is no better than Eliphaz. Both of them are presumptuous to Job’s trials.

10. In Job 9 – Upon hearing Bildad’s suggestions to repent for something Job hasn’t done, Job begins to feel like there is no mediator to his cause. Wouldn’t you feel the same way when going through this hell? Job’s friends are simply not helping this situation at all!

11. In Job 10 – Job chooses to plead with God to either intercede in his situation or to take away his life. At this point, Job is in dire straights. He has comfortless friends… and is definitely feeling all alone through this trial. Will God answer to his prayers and lamentations?

12. In Job 11 – Zophar, Job’s third friend urges Job to Repent. The question is, what does Job need to repent of? As far as God is concerned, Job is in right-standing and is blameless… but Job’s friends still assume that Job has some “hidden sin” that he may have failed to repent of, and thus assume, that if Job repents of that “hidden sin”, all of these calamities should end. Isn’t that still presumptuous though? 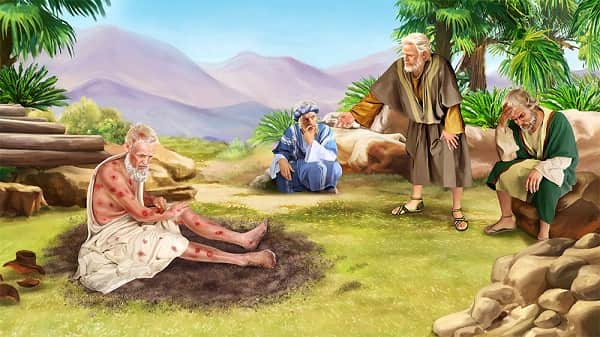 Job with his “so called” friends Eliphaz, Bildad and Zophar

14. In Job 15 – Job’s friend Eliphaz accuses Job of Folly. It is pretty clear that Job’s friends are not convinced that Job’s trials and tribulations were not brought on him without cause. Job cannot believe his friends accusations.

15. In Job 16 – Job reproaches his pitiless friends. Clearly, Job’s friends have not walked a mile in Job’s shoes, and therefore, can come up with various reasons as to why Job is going through hell at the moment. Not once did any of them consider Job to be blameless and without cause for the trials he has had to endure. 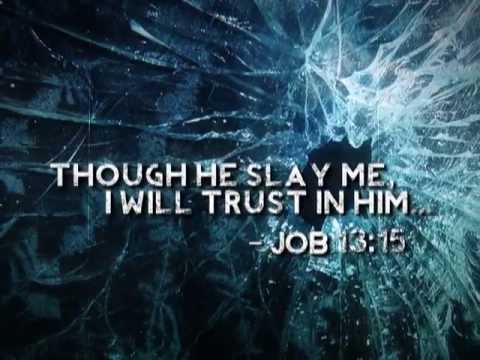 16. In Job 17 – Job prays for relief. He is at a point where he is reaching rock bottom with respect to his sanity. When you have no one supporting you as all hell breaks loose in your life, you can feel very isolated and alone that you will start to think suicidal thoughts in such dire moments. Many times does Job cry out to God for God to take his life. He is certainly feeling suicidal at this point. I mean, there comes a point when one realizes that Enough is Enough!

17. In Job 18 – Bildad doesn’t like the fact that Job isn’t listening to their accusations and feels like Job is pointing to his friends as the “Bad guys” who feel like they’re informing Job of where his problem lies in Job 18: 1-4. Have you ever had a friend that pinned the blame on you for the trials that you face even though the circumstances surrounding you are not by your own fault or making? This is what it’s like to have an “unfriendly – friend” by your side. Again, I say, who needs enemies when you have friends like Job’s?

Jobs Trials to be Continued in Part 2…