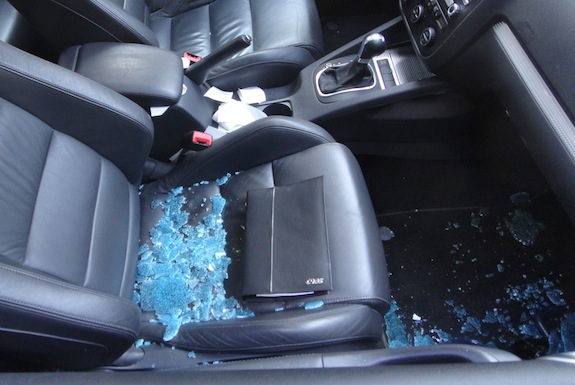 Not the actual picture of my car…just an example of what was done to mine.

So, short story. I was supposed to go shopping yesterday for Boxing day sales with my twin, but when we got to the car in our underground parking lot, we found that our driver’s side window was smashed in because someone had broken into the car. Not only had the person broken into the car, they ransacked it and stole the iPod that was in it. They also smashed and broke into several other cars in the same underground parking lot and stole some items. Needless to say, my sister and I were very ticked off. We went to the superintendent to report what had happened only to find that other residents were there making the same complaint. The superintendent had the guy on camera but we all couldn’t recognize this fool so we had to make a police report and unfortunately, they weren’t much help. So later on this week my sister and I will have to get our car fixed since it’s the Christmas holiday week, many services aren’t open. UGH! How frustrating!

On the other hand, I am thankful that I had wanted to go shopping early because I wouldn’t have known that this had happened had I not had the desire to go shopping. I would have probably found out 2 days later. I’m also thankful that no one got hurt during this whole process physically because the person had a weapon to break into the cars which I found to be a screwdriver that he left in our car (how careless can one be to leave evidence????). No one wants to be in an altercation with a wacko with a weapon. Anyways, it was frustrating to say the least, but we didn’t have anything valuable in the car except that iPod that he stole…. I got the impression that the person was high on drugs when I saw the surveillance video…WORD… I pray that he gets help though…

That’s why I entitled this post “Broken People, Broken Things”. I feel like if you’re broken on the inside, your behaviour towards others will reflect your brokenness in your actions. In this case, this broken individual broke into other people’s cars to steal their things without apology. I feel like this person is a broken soul that may have a seared conscience and can only think about what they want selfishly and not consider how their actions affect others in the process of doing selfish things. He really ticked me off…but I still hope that the thief gets help…he doesn’t look like someone who’s in his right mind based on what I observed from the surveillance video. All we can do at the end of the day is pray for such people and hope that the Lord will heal the spirit of their minds.

22 that you put off, concerning your former conduct, the old man which grows corrupt according to the deceitful lusts, 23 and be renewed in the spirit of your mind, 24 and that you put on the new man which was created according to God, in true righteousness and holiness.

Exodus 22:7
“If a man delivers to his neighbor money or articles to keep, and it is stolen out of the man’s house, if the thief is found, he shall pay double.

Anyways, that’s my rant for today. I hope everybody had a safe Christmas! God Bless You Everybody! 😀