Today’s contemplation comes from something that happened to me in the past. When I was little, I lived in Kenya with my twin and Grandparents who were diplomats. We lived at the Embassy and the house was huge! Even though the house was huge, the garden was incredibly spectacular at the back, because I think it was about 3 acres big or something…I’m not even sure if I’ve even got the dimensions of it right, but all I remember is that it was a huge garden and it wasn’t a typical garden because it looked more like a rain-forest type garden since we had various types of trees that were massive and created such a huge canopy that most of the garden at the back was covered in shade. I loved walking with my Grandpa and Grandma in the garden and would always run around in the garden with my twin since it was such a huge space. It was pretty awesome! 😀

However, there was this one time when I was walking with my Grandpa and twin sister all the way to the back of the Garden which was something we’ve never done before because I had a project to do, and that was to make a small house with natural materials and I simply didn’t know how to do that. I told my Grandpa about this project and he said he’d help me make one using dried banana leaves that we could get at the back of the garden since we had banana trees growing at the back. So I ventured forth with my twin sister and my Grandpa to the back of the garden, and sure enough, there were a lot of good leaves we could use to build my small house out of natural materials as a project so he started to pick them up alongside with my twin. I wanted to help, and I had started to help out, but something caught my eye and I turned around and fled the scene. My Grandpa who thought I was right behind him felt like I had disappeared and my sister, turned around watching me run like a gazelle back to the entrance of the house.

Let me run first and then talk later, Lol 😀

My Grandpa shouted at me and said “Nyasha! (That’s my African name). Where are you going?!!! Aren’t you going to help us?!!”.

My twin also chimed in and said “YEAH, whatsup with that!???”

Seky screamed at me for leaving them there and asked me why I had just bolted away from them, abandoning them without telling them then and there that there were snakes in the midst of the banana leaves?

This was my logical explanation for my actions: I told them that I ran away from the scene quickly because I was tempted and wanted to scream at such a high pitch at that moment, that I thought it would alert the snakes and we’d all be bitten, so… my logic was to run away as far enough as possible so that the snakes couldn’t be startled when I started to scream. Therefore, they would have a chance of getting away from them unharmed which was what ended up happening. See…wasn’t that logical??? My sister frowned at me in a pretty ticked-off expression and was not amused… LOL 😀 . She still thinks I ran to save myself only…but I thought I did the right thing, LOL 😉 . My Grandpa on the other hand could see the logic of what I had said, but was still amazed at how I was able to spot a swarm of baby snakes that had hatched (which are pretty lethal when they’re young) in such a dark part of the garden where it was hard to see, as we were all out there scavenging for good banana leaves to make my model house.

So why am I telling this story? On the topic of Sin, I liken Sin to a Snake or Serpent.

In the Bible, it explicitly tells us to do this one thing when it comes to addressing the Adversary (the Devil) of our souls:

[ Humility Cures Worldliness ] Therefore submit to God. Resist the devil and he will flee from you.

But did Adam and Eve do this? Nooooooooooo! And that is why we are all paying the price for their mistake.

In the book of Genesis 3, it was the serpent that deceived Adam and Eve out of the Garden of Eden through temptation as its choice of deception. 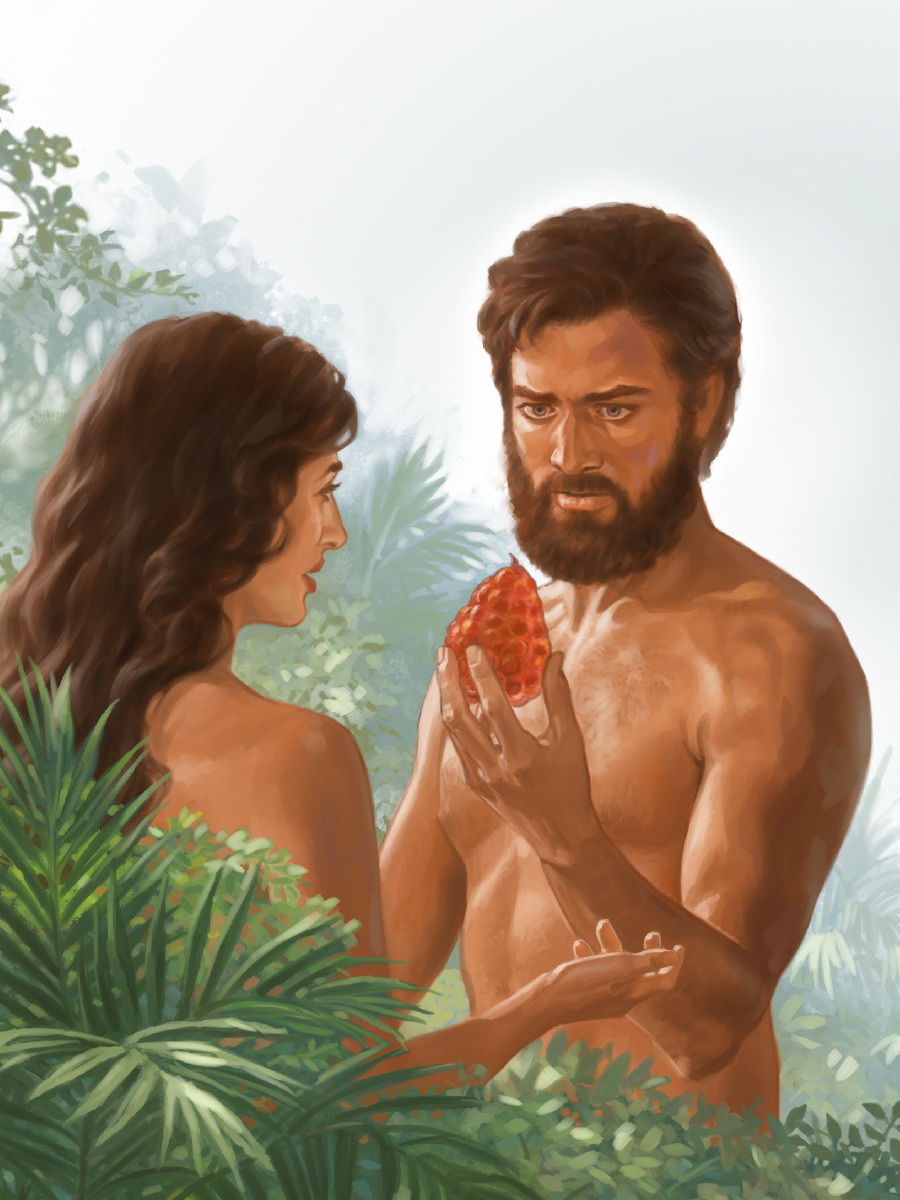 When the Lord called to Adam, Adam was embarrassed to be seen by the Lord because he now knew he was “naked” and hid from the Lord after he had eaten from the tree of knowledge.

9 Then the Lord God called to Adam and said to him, “Where are you?”

10 So he said, “I heard Your voice in the garden, and I was afraid because I was naked; and I hid myself.”

When asked by God concerning how Adam became aware of his nakedness? What was Adam’s response?:

11 And He said, “Who told you that you were naked? Have you eaten from the tree of which I commanded you that you should not eat?” Adam places blame on God for the woman that He gave him as oppose to fessing up for his own mistakes. Man up ADAM! I think this was daringly bold of Adam to blame God for His own mistakes. He should have just been contrite and apologized, but instead, in his pride (Take Note that this is the first evidence of Pride entering into man through Adam’s words [confession] and his actions), he blamed God and didn’t take ownership of his sinful mistake.

In Genesis 3:13 – Eve places blame on the serpent for deceiving her with respect to the choice that she had made to eat of the forbidden fruit on the Tree that was in the midst of the Garden when asked by God what she had done. She knew she was not supposed to have eaten it, and yet fails to claim responsibility for her actions:

13 And the Lord God said to the woman, “What is this you have done?” The woman said, “The serpent deceived me, and I ate.”

This whole “The Devil made me do it” argument just doesn’t act as a plausible justification for your actions EVE. As a consequence of Adam and Eve’s actions, the Lord was now pronouncing righteous judgment over this entire situation since none of the parties involved were forth-coming and repentant about their actions concerning the choices that they had made.

14 So the Lord God said to the serpent:

The Lord then said to the Woman in Genesis 3:16:

“I will greatly multiply your sorrow and your conception;
In pain you shall bring forth children;
Your desire shall be for your husband,
And he shall rule over you.”

17 Then to Adam He said, “Because you have heeded the voice of your wife, and have eaten from the tree of which I commanded you, saying, ‘You shall not eat of it’:

“Cursed is the ground for your sake;
In toil you shall eat of it
All the days of your life.
18 Both thorns and thistles it shall bring forth for you,
And you shall eat the herb of the field.
19 In the sweat of your face you shall eat bread
Till you return to the ground,
For out of it you were taken;
For dust you are,
And to dust you shall return.”

If Adam and Eve had simply owned up to their mess, I doubt that this judgment would have passed, but they failed to do so and this judgment is still in effect to this day.

In a way it seems like they were being cursed as the Lord was passing righteous judgment against them for their deeds; however, if you read the scriptures carefully, you will notice that the Lord was in fact redeeming the authority of Adam and Eve against the Serpent.

So people of God, when you think about the temptations that are out there to cause you to miss the mark (Sin), always remember that confessing your mistakes to the Lord can and will always redeem you to be in right-standing before God again. When you are contrite in spirit, the Lord shall not despise you because He really loves you.

Psalm 34:18
The Lord is near to those who have a broken heart, And saves such as have a contrite spirit.
Psalm 51:17

The sacrifices of God are a broken spirit, A broken and a contrite heart— These, O God, You will not despise

For thus says the High and Lofty One Who inhabits eternity, whose name is Holy: “I dwell in the high and holy place, With him who has a contrite and humble spirit, To revive the spirit of the humble, And to revive the heart of the contrite ones.

So today, come before God with a humble heart and confess your sins and past mistakes so that you can be in right-standing today. Give God praise, for He has given you authority over that which sought to deceive you from receiving the promises of God in your life. Satan no longer has power over you when you confess your sins before God. It is through your confession that we are redeemed. May we give God the highest praise for our redemption, Amen!

2 thoughts on “The Serpent of Sin – Run or Tread?”